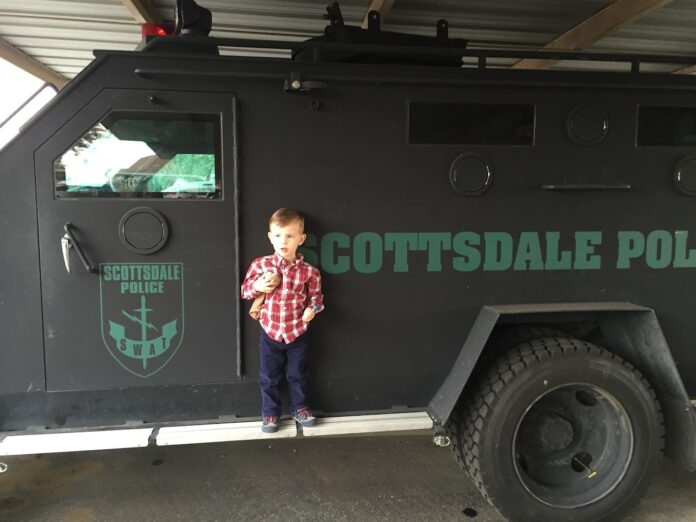 I recently saw the article, Militarization of Local Police Isn’t Making Anyone Safer, pop up on Digg and it pissed me off.  For about two years Digg has been curating popular news articles on the Internet.  One problem, they only tend to curate law enforcement related article that are markedly anti-police.  The above article being the most recent.

Let’s look into the claim made by the article’s title, but first a little history.  Line of Duty deaths in US law enforcement steadily increased since they were first recorded in the late-1700s.  This should be expected since so did the overall US population.  It stayed steady until 1970 when the US witnessed double digit increases in murdered police officers, which peaked with 284 in 1974 (310 were killed in 1930 during Prohibition but those numbers declined with its end).  In 1971 larger police agencies began providing groups of officers Special Weapons and trained the officers to use them, thus Special Weapons and Tactic (SWAT) teams were born.  By 1974, the Los Angeles Police Department had a full-time SWAT team and it is generally thought that year was the year the idea went mainstream.  Throughout the 1970s the SWAT team idea spread across US police agencies.

These first teams implemented two items which are common place today but were new at the time and today would be considered “militarizing”.  The first was the deployment of heavy weapons like fully auto assault rifles, armored vehicles and grenade launchers, as these were in ample supple at the end of the Vietnam War.  The second, and more ground-breaking was kevlar.  For the first time officers were wearing a device that helped protect vital organ from bullets when the DuPont company perfected it between 1970 and 1976.

Two things happened starting in 1975. One, fewer and fewer police were being killed even though overall police assaults and gun violence targeting officers was increasing.  Two, per capita, police were shooting fewer citizens.

The trend of decreasing crime and fewer police killed each year is extremely complex.    You can read one general study done by the University of Ohio on this topic titled, Trends in Killings of and by Police Officers.  But it has to be noted that in most discussions about the topic, from historians to researchers to  actual police officers, includes mention o of new equipment and tactics, which really started with the creations of the first SWAT team in the early-1970s, as one factor for where we are today.

The study this is all based on can be found here.  In it, Jonathan Mummolo does make the assertion that even the police are not any safer with the deployment of SWAT teams.  He writes, “In sum, estimated effects are generally positive and often indistinguishable from zero, and there is no evidence that acquiring a SWAT team lowers crime or promotes officer safety.”  But let’s look at what his study measures.  It measures the correlation between an agency obtaining and deploying a SWAT team to the OVERALL officer safety at that agency.  In order words, operating a SWAT teams did not seem to make it safer for the average patrol officer.  What one would really need to look at to make the claim that SWAT does not have a bearing on officer safety are agencies that lack SWAT teams or incidents when a SWAT team could not be deployed for various reason and your average patrol officer was tasked with high-risk enforcement actions.  This is hard since most agencies have SWAT teams and if they do not, one is usually deployed from an assisting agency.

From my experience over 20 years in law enforcement here is when and how SWAT does enhance officer safety.  After the patrol officer is shot and the suspect flees, later barricading himself in his residence.  When that suspect has to be extricated by force from the residence, the deployment of a team with Special Weapons and Tactics means that lesser trained, more poorly equipped patrol officers don’t have to do it.  It means when a drug house, guarded by a Mexican drug cartel, has to be raided during a warrant, the officers tasked to do it are afforded only best protection, equipment and training.

The deployment of a armored BearCat to transport officers to the door of the residence takes the place of an patrol car in which only a windshield provides protection.  A drone or robot can be used to not only locate the suspect within the house, and also to ensure no innocent bystanders are inside like kids.  When it is time for entry, shaped explosives quickly remove doors so that multiple officers don’t have to stand with “the fatal funnel” for seconds or minutes trying to kick it down.  Smoke and flashbangs are used to disorient the suspect, making it more difficult to return accurate fire at officers.  If deadly force is required, high powered rifles eliminate concerns if the suspect has body armor on, while at the same time provide more accurate fire, ensuring innocents are not hurt.  Finally, a well-trained entry team with a coordinated building clearing pattern help to minimize the chances that any officer will be injured by unknown suspects waiting in ambush.

By virtue of the fact that a group of lightly armed and modestly protected patrol officers aren’t tasked with conducting high-risk entries and search warrants, the additions of SWAT teams increase overall officer safety.  It is why the military employees special warfare groups like the US Navy SEALs and Delta when conducting operations involving high-risk/high-reward targets and usually will not task a standard infantry platoon, full of 19-year-old enlisted guys, to tackle it.

Take the politics out of it.  This all seems like common sense, even to most 10-year-olds out there playing video games, who ensure they supply their avatar with the best rifle and body armor before playing a round of Call of Duty.

So, the assertion that the “militarization” of the police hasn’t helped “anyone” is dubious at best, unless of course “anyone” is only meant to include lower income/high crime communities that tend to skew more African-American.  If by “anyone”, you also include the police, the title of the article is incorrect.